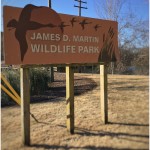 Gadsden has waterways running throughout the city offering opportunities for boating, fishing and picnics. After my visit to Noccalula Falls, I stopped at the James D. Martin WIldlife Park to walk around H. Neely Henry Lake and enjoy the views. I initially thought my GPS was leading me astray when I found myself at the entrance of a movie theater in a strip mall. But the park is a surprising urban island full of water fowl, dog walkers and runners. 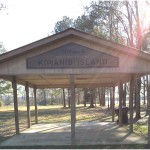 It was a bit cool for a picnic but I know I have friends who like to barbecue. Kiwanis Island is a covered patio perfect for that. 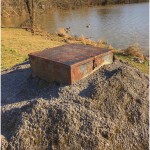 Who knew there was treasure on the Island? I didn’t attempt to to open it because that rock was a bit steep and my legs were pretty sore. 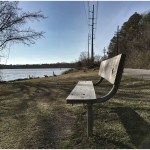 There were multiple benches begging to be sat on while the lake beckoned. But the ducks and pigeons were a tad aggressive and possessive and weren’t interested in sharing a seat. Was it me or the weather? 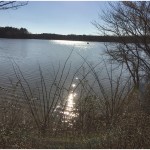 It was wonderful to sit and gaze at the water while giving those ducks and pigeons the side eye. But when I return, I’ll bring my running clothes and take a run around the lake. (While avoiding the ducks and pigeons.) 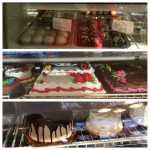 I ended my day with a sweet stop at Gadsden’s famous Cothran’s Bakery where I picked up a sour cream doughnut (I ate it in the car before I could take a picture) and a fried peach pie and a slice of pound cake that I at when I returned home. 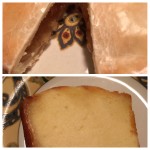 It was a great Gadsden day! And of course I ran out of time so when I return, these are the things I’ll do:

Visit the Alabama Trail of Tears Memorial. I attempted to visit on this trip but didn’t arrive until after 4:00 and was told by a lovely man that the museum opened at 10:00. Apparently their closing hours vary so I am determined to arrive at 10:00!!

Visit the Gadsden Museum of Art and feed my love of art and museums.

Visit Noccalula Falls Park which officially opened March 1. This time I’ll get to ride the train, eat ice cream and see the other side of the park.

And, just outside of Gadsden in Rainbow City, the Alabama Chocolate Festival. Guess where I plan to be on April 2 at 10:00? I’ll need an extra early run that Saturday!

Have you visited Gadsden? Tell me, what did I miss?

2 Comments on A Day Trip to Gadsden, Part Two