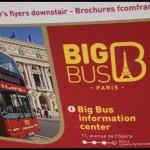 This was the day I hopped on the Metro with success! I didn’t get lost or confused BUT I did have to wait for a few connections. More people got on the Metro as it entered the city center and it became more crowded. I thought it would be a good idea to act as a tourist so I could get around more easily so I purchased a Big Bus tour ticket and it was a good choice. Not only were the metro lines long to exit and enter, but the traffic was horrendous! I was ready for sightseeing! I purchased the ticket at the office although I could have saved 10% if I had purchased it online. This gave me a day of unlimited hopping on and off of the bus and made traveling more efficient. Since this was my last full day in Paris and I wanted to get as many experiences in as possible. 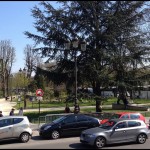 But I had forgotten today was still a holiday and the city was FULL of people. This meant looong lines to enter everywhere I wanted to go today and I had to return to my hostel in a not-too-exhausted state. There was a 3 hour wait to enter the Eiffel Tower so I admired it from the ground. There was a 4 hour wait to enter Notre Dame and the line spilled out of the church and into the park across the street. Even the Arc de Triomphe was challenging: I played chicken trying to get close only to meet more lines of people.

It seemed that I would be an observer and not a participant today and that made me sad. I longed to see the inside of the Cathedral, climb the stairs to the Tower (I wore my running shoes) and peer from the Arc. I rode the bus and got out as often as I could and jostled with the others for glimpses. 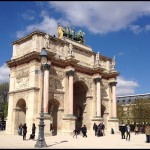 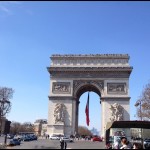 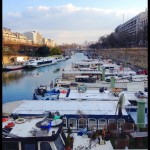 I did take the time to walk along the Champs-Élysées and observed the artists, shops and restaurants. But time moved on, as it does, and it was time to return to my hostel. The Metro was more crowded than earlier but I was delighted when a musician entered and played for us (with the expectation of payment) until the next stop! 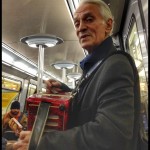 It was an excellent way to end the day. Yes, there were sights I didn’t get to see and food I didn’t experience but I was still in Paris. And now I knew that one day I could return.