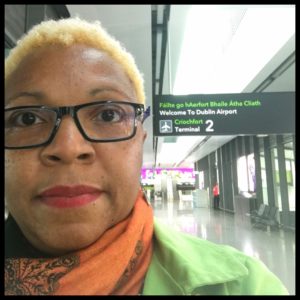 First, jet lag is REAL. For REAL, real. I almost missed an entire day in Paris because I sat down to take a nap and awoke hours later, confused as to why I wasn’t in my bed. I will confess, I usually stay up all night before a long flight which contributes to my jet lag. BUT I discovered something fabulous on this trip to Ireland that helped with my jet lag: Early morning running.

I wake at 4:00AM pretty much every day to go running. I’m up at 4:00AM even on the days I don’t go running and I’ll start a series of exercises, calisthenics and yoga that support my running. As an aside: Burpees were invented by Satan. I slept fitfully on the flight to Ireland (no lie-back seat, skimpy pillows, hot and cold temperatures, too much noise and I forgot my melatonin) and I expected to struggle to wake this morning. I also only had two hours of sleep the night of my flight because I’m dumb that way and spent last week doing things and going places instead of packing. But I was really energized this morning after getting the wake up call and light show from the flight attendants.

Then my alarm went off about 30 minutes later because it was 4:00AM MY time and I’m up by 4:00. So, to all of my friends who think I’m crazy waking so early, there is a benefit to being an early riser. Not only am I healthier, I’m better prepared for cross-Atlantic flights and their corresponding time differences. I will probably be unconscious around 8:00PM and may struggle to get up tomorrow morning but right now I’m awake and that feels right. I have a party to attend and some exploring to do so maybe I won’t crash until later.

What tips do you have to adjust to jet lag? How do you manage to sleep well the night before a long flight?