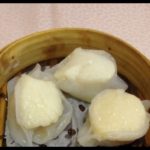 London, surprisingly, is a great food destination! Birdie had tried a few restaurants touting the “best” fish and chips and had found them to be consistently disappointing, bland and boring. I asked her flat mates, friends and schoolmates for suggestions and was told to forget the fish and chips and try something new. So, I wanted culinary adventures!

The dim sum in China Town was incredible! There are over eighty restaurants and we basically showed up and ate. There was no research regarding which restaurant was ranked best , who had the best seafood or which restaurant had the best dessert. I’m all about dessert but with a suitcase full of candy, cookies and brownie mixes, dessert could wait. 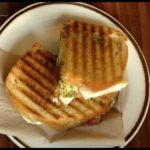 My grilled tomato, mozzarella and pesto sandwich at  the Bush Theatre was amazingly good. These sandwiches can be tasteless but whatever was in the pesto gave it zing and depth.  It was perfect to eat before the play. 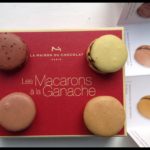 Les Macarons a la Ganache!!!!! Technically, these came from Paris but I saved them to share with birdie so I count them as part of my London Eating! Not eating these in Paris was so difficult. I mean it was chocolate and I am a chocolate fool and I didn’t eat them at all. Imagine a small round cloud of semi-sweet chocolate layered with a dense, thick, rich chocolate center and another light cloud of chocolate on top. HEAVEN. NIRVANA (not the band). PERFECTION. I was a macaron virgin and this food was a gift from the gods. There were other flavors but, of course, the chocolates were my favorite. 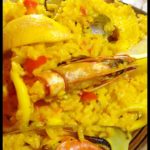 The paella at Escudo de Cuba was the greatest thing I ate in London! It was spicy, full of chicken and sausages, rice and the biggest prawns I’ve ever seen. Was that me eating meat? Yes, on vacation and judiciously.  The platter was big enough to feed 3 people at dinner and have left overs the next day. I could have eaten it every day. EVERY DAY but when you’re in a new city you should try new food. 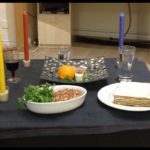 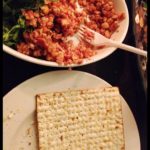 The Passover meal. I was honored to be included in a seder held by some of the students. Everyone contributed a dish to the potluck and I was impressed that they did everything themselves. The contrasts of sweet and bitter were especially wonderful.

I also had several forgettable meals: the Mexican restaurant with the limp chips, tasteless salsa and grilled “seafood” which made me question what I really ate. That Jamaican jerk chicken place where I had to ask for hot sauce. Me, asking for something to increase the heat! I won’t identify those places but if the food is bland, I’m not sure if there is anything you can do to make it better. Ask the chef, perhaps? Carry a side of hot sauce?

So, what did culinary delights did I miss? What should I try when to London? Tell me in the comments!