One year ago today, I arrived in Paris. France, not Texas.

My Paris adventure began the night before when I stayed up all night packing. I’d worked all day, was too excited to sleep and was still doing laundry. I had a 5:45 AM flight out, two awfully heavy suitcases, a short layover and an overnight flight to Paris. I essentially had gone sleepless for about 35 hours. I didn’t want to sleep on the flight because I thought I might miss something and I couldn’t wait to stare out of my window as the full moon shone on the Atlantic Ocean.

My first flight adventure occurred as I was boarding. Because it was spring break, the flight was FULL and there was not much room for carry-on bags. The flight attendants stopped everyone with a bag and had them place it in the carry-on bag check and mine did not fit. I was told to check it. Immediately! So while the rest of the plane boarded, I scrambled through my bag and removed everything of value, my prescription drugs, my extra pair of glasses and my phone and charger. That makes THREE checked bags.

My second adventure on the flight was my seat mate who was sitting in my window seat. When I asked him to move, he ignored me, snapped his newspaper at me and refused to move. The flight attendant looked at my boarding pass, spoke to him in French and (this is my interpretation) told him to get his ass out of my seat. They had a spirited conversation, he was not happy and he pointedly ignored me during the flight making it challenging to go to the restroom, receive my dinner or share the armrest.

But I didn’t care. I was on my way to Paris!

We hit turbulence which caused me to be nauseous and I couldn’t fully enjoy my meal. I eventually dosed off and woke to the sun resting on clouds through my frosty window. 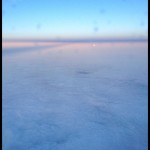 After spending about an hour going through the French TSA, I stepped outside, breathed in the Parisian air, damp and cool, and texted my family that I had safely arrived.

I would heartily suggest taking the Metro instead of a taxi. It’s like a spider’s web but it will take you everywhere you need to go and cheaply I, however, spent $65.00 on a taxi that transported those heavy suitcases, my returned carry-on, camera bag and exhausted body. It was worth the price. 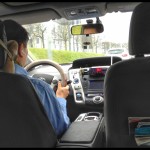 Pierre, my French speaking Vietnamese driver, was efficient, helpful and curious about me (as was I about him) and gave me some great insider tips:

We soon arrived at my hostel, Pierre took my bags in and I was invited to go to the cafe attached to the hostel for something to eat while my room was readied. 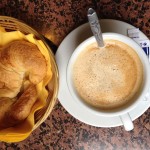 I sat down to my first Parisian meal, spoke to some very curious Parisians (who kept asking why I was there) and promptly fell asleep at the table in the cafe. I blame it on the 8 hour time difference, my lack of sleep the previous night and simple jet lag. I had been awake too long and I was tired.

I consider every trip and adventure and as an opportunity to learn something new and I learned to GO TO SLEEP MIA! Arriving sleep deprived to your destination is a terrible idea and you can’t enjoy a new city of you’re asleep in a public cafe. I had a limited amount of hours and I couldn’t afford to waste them in a sleep deprived stupor. TIME IS MONEY!

I was gently awakened and informed that my room was ready. I unpacked, sat on the bed and woke up 3 hours later. Le sigh….

But now I was ready to explore!

9 Comments on How To Sleep In Public In Paris.